My fingers and toes are pretty jacked up.

As a child I had severe problems with ingrown toenails on my big toes. It got so bad that I needed multiple surgeries on both sides of each big toe where the whole nail was removed more times than I can remember. Eventually the roots were burned on each side so the nail can’t grow on the sides, resulting in extremely narrow toenails. On top of that, I’ve run 20 miles a week since November 2011, which has callused my feet. If feet disgust you then my size 13’s are your worst nightmare.

As for my fingers, in addition to 14 years of being a type 1 diabetic and pricking my fingers 3-5 times a day with a needle, I have also broken the majority of my digits through playing sports as a youth. I have a lot of scar tissue on my fingertips. 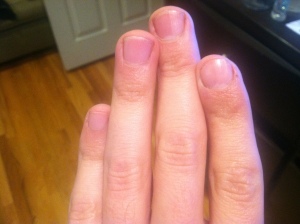 Look how crooked my fingers are.

After all those years of damage to my appendages I figured it’s time I take better care of them. I’ve heard a therapeutic procedure for hands and feet is the notorious manicure-pedicure. The only problem with that treatment is that it’s a practice associated mostly with women, so I have shied away from ever getting one.

I am quite comfortable with my manhood, but I can barely say Mani Pedi without feeling a bit awkward. It’s a hard thing to say without sounding effeminate. Plus it’s especially foreign in the Latino male community, like my comedian friend Alex Reymundo jokes, “Mani-Pedi sounds like a Mexican NASCAR driver.” Regardless, I set out to get my first ever Mani Pedi. I knew I would need some assistance getting through this new thing, so I enlisted the help of my friend Samia Khan.

Quite frankly, Samia was not surprised to hear I had never got a Mani Pedi before, so last Thursday she invited me to get one with her.

Prior to our adventure, I told her I didn’t know if my fingernails were long enough to get it done. Part of me was probably trying to back out at the last moment by finding an excuse not to test my manhood. She told me to send her a picture. After examination, she said they were short but they could work with it. That was definitely the first time I “sext” messaged a girl a picture of my fingers.

When Samia and I arrived at the whole-in-the-wall nail salon in Culver City she told the head lady that we had an appointment for two. With Samia’s statement I noticed a wave of heads lifting from the steady position to examine what I was doing in a nail salon.

You could really hurt someone with those nails

If you read the definition in my calves it says "manly."

Before Samia sat at a station across from me she picked out a nail polish color. I know you’re probably wondering what color I chose. To answer your thoughts, I got a fluorescent pink. Not really. I didn’t go that far with the Mani Pedi.

It was hard to get comfortable in the open room. I couldn’t escape the thought that all the lady employees were talking about me, since they were speaking a language I couldn’t understand. It’s usually every man’s fantasy to have a room filled with women all staring and talking about him, but their looks were out of curiosity rather than infatuation. I tried my best to ignore the older white lady sitting diagonally from me who stared with an obvious look that said I was intruding in a club reserved just for women.

Samia’s presence definitely made it feel less awkward for me, and as I turned to my right I relaxed even more because I saw a woman who resembled and sounded just like my old friend, comedian Marilyn Martinez, who passed away in 2007. We eventually struck up a conversation with Marilyn’s twin. She couldn’t have been nicer with a wonderful sense of humor, just like Marilyn. I don’t think Marilyn would’ve came down from heaven just to get her nails did, but it certainly felt like one last hang out sesh with an old friend. 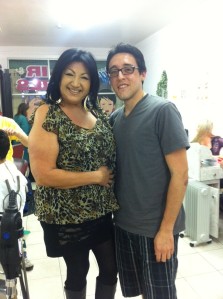 I was getting comfortable with the somewhat flamboyant body positioning a Mani Pedi requires when I heard Samia giggling. I asked her, “what’s so funny?” totally thinking she realized me getting lost in the enjoyment of the hand and feet massage I was receiving. Turns out she is quite ticklish and the lady was scrubbing the bottom of her feet with a sponge type thing. 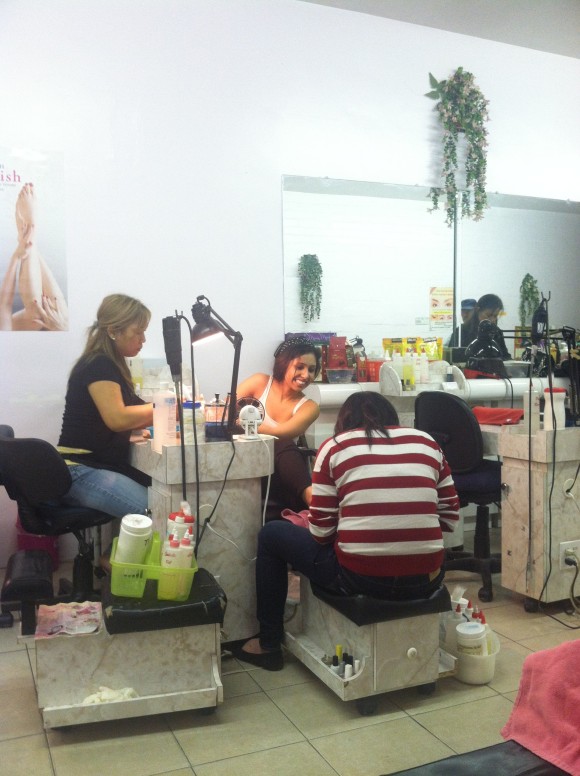 My paranoia was just Samia being ticklish.

The stares from ladies continued, but they eventually got better. One cute blonde girl even gave me a smile like, “how you doin?” I returned her glance with a smile and she blushed a little. Good to know I still exude some masculinity while participating in an act associated with females. 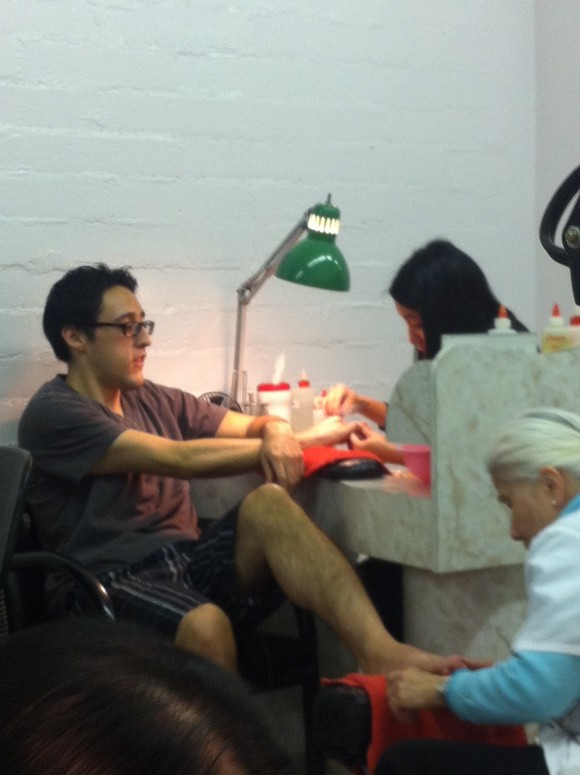 Clearly I am the definition of a man.

I finished before Samia so I approached her station while the lady painted French tips on her toenails. She asked me what I thought of the experience. I could notice the major difference in how much cleaner my finger and toenails looked.

Can you see the difference in "Palmela?" That's what I call my left hand.

My hands and feet unquestionably felt healthier. Incorporating a Mani Pedi into my lifestyle probably won’t happen, but I can see getting one again in the future, even though it still feels awkward to say Mani Pedi. Most importantly, the experience allowed me to develop a newfound respect for what women do to look good.

Ladies, I appreciate what you do.

While I was giving the post-mortem, however, my eyes must’ve wandered because Samia told me to stop looking at her feet. I by no means have a foot fetish, and was just trying to see what was going on. But if I ever develop a foot fetish I now know the perfect place to hang out.

To see Samia’s manicured nails you can check out the adventures of her on-camera career via her wonderful blog KHANversation Pieces or follow her on Twitter.