Since I got my license on December 2, 2001 I’ve been pretty fortunate in my life when it’s come to my vehicles:

This was a smart car to buy when gas wasn't $4 a gallon.

The week I got my Xterra was one of the greatest weeks of my life. I earned a college scholarship, and drove my brand new car to my first paying writing gig. It has been with me for every non 9-5 job I’ve had over the past eight years. Given my heavy driving schedule of over 20,000 miles per year, I’m quite lucky it hasn’t required major repairs. I should probably knock on wood.

On Friday of last week I visited my friend and colleague Trevor Wayne in North Hollywood to discuss our yearly business goals. Before I left his place, my car battery had a slight hesitation when I turned the ignition. The next morning, I tried to start my car and the battery was dead. I knew I should have knocked on wood.

It shouldn’t have been dead after purchasing it in May 2009. I replaced the factory battery then just to be safe before I went on tour from Los Angeles to Portland with professional wrestlers. That’s an entirely different story, which you can read here if interested.

To this point in my life I’ve never had battery trouble, so I opened the hood with no idea how to fix the problem. Going under the hood for the first time by myself is not much different than going under a girl’s shirt for the first time. Both involve a lot of fumbling around. But after only trying three new things for this blog, I’ve already felt the inspiring effects, because I felt I believed I could solve the problem.

I opened up the hood and went back into my memory bank to think of how I witnessed my Grandfather and Uncle fix car battery problems in the past. The first thing I noticed was acid corrosion on the battery’s nipples.

I forgot to take a picture of the acid corrosion, but trust that there was so much green foamy stuff coming from the battery that I looked something like this.

I grabbed some baking soda, water, and some assorted tools to clean off the residue. My Mani Pedi from two days prior was immediately ruined. Once the residue was cleaned, I tried to start the car. No response, just more clicks than a tap dancer on speed.

I asked my Uncle for advice and he said it could be the alternator, which would mean something if I knew what an alternator was, but that most likely the battery just needed to be charged. He allowed me to borrow his battery charger, and an extension chord.

Once the charger was plugged in I grabbed the black and red clasps attached to it, and rather than guessing which one was for the + and – I asked my roommate. He came outside to call 911 if I electrocuted myself. I attached the nipple clamps correctly and let it charge for a couple hours. 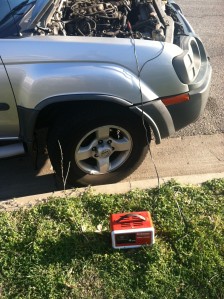 If I was kinky, I might have alternate use for those clasps

The car started right up and I thought that was going to be the end of the story. My confidence was high, but just like the water heater, my victory was short lived.

Later that night I got ready to go to Beso in Hollywood for Trevor’s birthday. I was going to drive the crew, since I don’t drink at all anymore. But the clicks of the tap dancing speed addict paid another visit to my battery, and my car wouldn’t start. I couldn’t help but feel that my Mom was back home in San Diego with a pin needle and a Hot Wheels car, preventing my departure through voodoo, since even though I’m an adult she still worries about me in the Los Angeles nightlife.

Since it was too dark to work on the car, I said “screw it” and waited until morning. Around 8:30AM I put the key in the ignition and the engine immediately turned over. My car didn’t start the night prior, but immediately started the following morning. It was more passive aggressive than my ex-girlfriend. Nonetheless, I charged the battery for the next nine hours just to be safe. Since that time, the car hesitates for half a second and then turns over…also not unlike my ex-girlfriend.

I am thoroughly shocked I didn't electrocute myself.

The fact that the car runs is victory in itself, but I do need to get a mechanic to look at it, since that half a second hesitation frightens me and we all know there is no such thing as public transportation in Los Angeles.