I am an excellent cook…if you count microwaving canned soup as fine cuisine.

What else would you expect from a 26-year-old bachelor?

I haven’t really tried to make too much food from scratch, because I don’t have patience. Plus, it’s so much easier to purchase food from people who are professionally trained to make it.

There are excellent cooks in my family, however, like my Mom who is extremely adept when it comes to baking. Every Christmas when I was younger, she used to make an assortment of different types of cookies, cakes, and desserts. People from around the neighborhood would visit to indulge in her artistry.

I never learned from her how to bake, simply just taking the time to slip into the kitchen to lick the leftover frosting on the spoons. Despite my rogue expeditions for frosting-laden spoons, I don’t have much of a sweet tooth. Last week, however, I felt a bit of a craving for chocolate chip cookies.

Because my car was having battery issues at the time, I walked to the grocery store with the gumption that I could bake cookies from scratch. I just as easily could have purchased the standard plastic wrapped Chips Ahoy, or the pre-made dough that you simply pop into the oven, but instead, I showed some patience and texted my Mom for her recipe with the necessary ingredients. She texted back saying chocolate chip bags usually have a recipe for chocolate chip cookies on the back. Who knew? Since I utilized all my patience in not buying already made cookies, I didn’t wait for her recipe.

Nestle is quite presumptuous that I will be using their chips in their recipe.

(On a side note, I’m still not used to my Mom utilizing text messages more than actual calls. I find it miraculous when the elder generation adapts to the times. It’s quite awkward, however, when I’m texting a chick and a message from my Mom pops on my iPhone. It’s like the technological equivalent of your Mom walking into your childhood room when you’re with a girl.)

Check out my unfinished countertops.

Upon my return home I realized I didn’t consider that I didn’t have a mixer. So, I grabbed a wooden spoon and by hand I mixed 2 sticks of butter, ¾ cup of granulated sugar, ¾ cup of brown sugar, and 1 tsp of vanilla extract until it was creamy. Since the butter was relatively hard my right arm got quite the workout. I then added two eggs, and mixed those in. 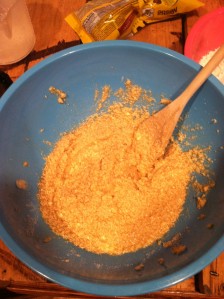 I then added 2 ¼ cups of flour, 1 tsp of baking soda, and 1 tsp of salt and mixed it with the appetizing image from before. 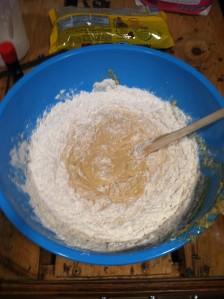 It's starting to take the form of dough...I think.

After that, I added a bag of chocolate chips, which equals 2 cups, and also 1 cup of chopped nuts.

I think I invented a new form of trail mix.

From there, I put chunks of the dough on the trays. The fat kid in me was very tempted to just stop and eat the dough out of the bowl. 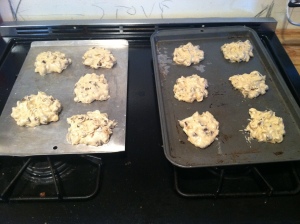 This looks appetizing...No wonder I used to weigh 300 lbs.

10 minutes later…voila. About half of the cookies came out slightly burned on the bottom, but the ones that came out right, were absolutely delicious. I had no idea they only needed 10 minutes in the oven. For some reason I figured it would take longer to transform from larva into butterfly form, but it took longer to mix the ingredients. 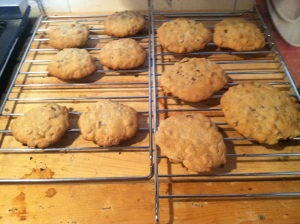 I guess my Mom did pass her baking genes on to me. I’m now curious what else I can cook or bake from scratch and actually make it edible. 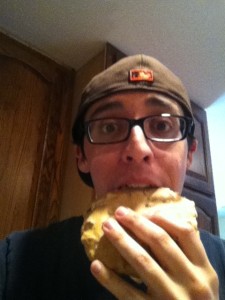 It actually does taste better when you make it yourself.

Before I started this experiment I expected a scene straight out of I Love Lucy, where flour would end up all over me and the kitchen, but that wasn’t the case. I don’t know how often I’ll bake in the future, considering I don’t see many circumstances which will call for it, but it’s good to know I have the capability to do so. 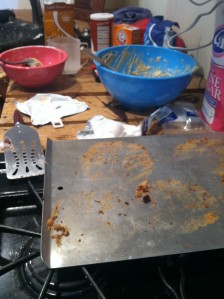 Cleaning is what will prevent me from baking in the future.