#41 – Move In with My Girlfriend…On Purpose

When I love something, I recognize it immediately, and I go all in.

That’s why I am capable of eating Chipotle seven days a week.

That’s why I used to go to Las Vegas every other week.

And that’s why after dating my girlfriend Zoe after just four months we decided to move in together.

No, I am not comparing my girlfriend to Chipotle and Vegas, but she loves both things too, so I am sure she wouldn’t mind if I did.

My favorite picture of us…of course it’s in Vegas.

And yes, it sounds crazy that I’d move in with a girl after just four months, especially when you consider I typically don’t show a girl where I live until after three months.

So, this is the first time I’ve lived with a girlfriend…on purpose. Other times, they kind of just moved in because of proximity to their work and I didn’t even realize it until they had my spare key and were no longer calling me to let them in the front door of my building.

Since the first of the year I basically stayed at Zoe’s place in Sherman Oaks every night. I hate the Valley. I lived there for six years and moved into Hollywood for the past two years so that I could be closer to the studios and comedy clubs. Zoe’s living situation with a roommate was becoming less than ideal for her, and I was getting tired of feeling like I no longer had a home since I would go days and often weeks without seeing my apartment. That’s fine when I was on the road a lot, but when I’m in Los Angeles I want to feel like I have a place.

So we came to the conclusion that we should find a new place together. Neither of us is conventional. We both do things to the beat of our own Pandora stations. And we both knew the other person was in the relationship till death do us part. So why go through the typical BS of societal dating standards? It doesn’t work out for most people who follow that route anyways. 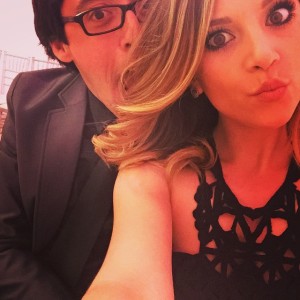 Zoe puts up with this type of behavior, so what else can I ask for?

We knew people would probably think we were crazy. But we were ready for that. When we began telling people, to our surprise, no one thought we should be looking for a place together in a mental institution. Everyone actually thought it was a good idea. I guess they probably saw that we do everything together anyways, so it made sense.

Although, she has been known to make faces behind my back as well.

My family loves Zoe and her family loves me. Before her, I never introduced a girlfriend to my family, because whomever I was dating always gave me slight hesitancy in thinking that I was in a temporary relationship and I never wanted to introduce something temporary to something permanent like family. Zoe had introduced several boyfriends to her family, but according to her family I’m the first one they’ve actually liked. So with so much support we were further entrusted in thinking we made the right choice.

Zoe and me with my Mom on Mother’s Day.

We chose the first place we visited because we knew exactly where we wanted to live. I lived off Hollywood & Gower and from the day I moved in there was a new apartment complex being built just one block west called EastownLA. The day the complex started showing apartments to be leased, I attempted to take a tour. When they told me the price of the least expensive apartment, I turned around immediately. Zoe has a similar story of wanting to live in the complex that became OURS.

We both make good money. In fact, I don’t know how my poop and fart jokes compensate me so well. But we are both extreme individuals and have got used to paying rent on our own without the help of a significant other, so before we knew each other we both didn’t think it would be smart at that time to move in to a place with such a large financial ceiling.

Our leasing guy showed us several different style units around the complex. Our non-negotiables were a balcony and a lot of closet space. We were hoping for two parking spots and a washer/dryer in the unit as well. Realistically we were sold on the complex the moment we saw the gym and how it offered more equipment and features than 24 Hour Fitness. Then we saw the pool and Jacuzzi, which rivals the W Hotel and offers weekly pool parties with alcohol, food, and live DJ’s for the residents. The other amenities like fire pits and stainless steel barbecues sprinkled throughout the complex’s four buildings are just an added bonus.

The leasing guy showed us several units with different layouts that included our non-negotiables. With the complex only at 50 percent occupancy we had a lot of options to choose from. But for various reasons we didn’t like any of them. Then he showed us OUR apartment.

We aren’t done decorating, but it’s a nice start.

It’s perfect. It has a large balcony with one side that overlooks the pool while the other side overlooks Hollywood Boulevard. The light just pours in from floor to ceiling windows. There’s a walk-in closet, which to my surprise fit all of our stuff in since after all Zoe is a girl. The bathroom is huge. There’s a washer/dryer. All the appliances are brand new. No one has ever lived in the apartment before. And to top it off, the complex threw in free rent for a month.

The view from our balcony.

Just to be sure, we looked at complex’s we figured would be comparable in the area like the Hollywood Tower and Sunset & Vine, but those places were just as expensive and didn’t have anywhere near the space that OUR place offers, plus those buildings are old and didn’t have the amenities either.

I kind of don’t believe I live where I live. After a few weeks now, it feels like a home now that we’ve framed our pictures, bought a couch and organized the furniture.

The one thing that doesn’t escape me is that there’s definitely a type of person who has the lifestyle that fits a building like OURS. There are probably a total of four units leased to families with kids. There’s also A LOT of white people. I’ve seen one black person, one Asian person, and for the first week I was afraid the cleaning staff was going to tell me to get back to doing the yard work.

This was only the third time I’ve moved in my life. Zoe has moved considerably more times than that. Nothing about the move has been discomforting. Four months seems really quick, but both of us could’ve made the move after the first weekend we met. It is easily one of the best decisions I’ve ever made, because I love Chipotle…err I mean Zoe 🙂 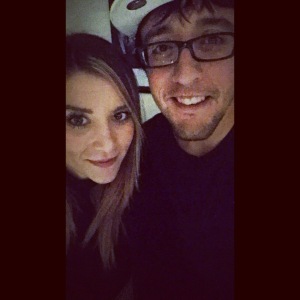 We took a “selfie” the first night we met each other.