I spent most of May away from Los Angeles, and when I was in town I was pretty much just working. Last Monday, however, on a rare occasion I made it home during the daylight hours. And this is how my roommate Jason Hadley greeted me.

Look at that focus

Hadley had a bow, some sticks, a rock, and a fire pit with the intention of trying to start a fire, caveman style. Hadley is a comedian, so I immediately thought he was considering a transformation into a prop comic. Most of the time I don’t question the motives of people in my life, because I have a pretty strange cast of characters orbiting around me. Hadley is no different.

I had no intention of questioning why he was trying to start a fire with two sticks, which is why he offered up the fact that he was just cast in an upcoming reality show titled, “Are You Smarter Than a Boy Scout?” I’m not even kidding.

In order to not look like a fool on TV he was practicing to defeat some 10-year-old boys. Fortunately for me, attempting to start a fire with two sticks was on my Discomfort List of things to do. I say “fortunately” because his casting meant my lazy ass didn’t have to compile the necessary supplies.

My first question for Hadley was how long he had been working at it before I arrived. He said it had been three hours and counting, which meant I had enough time to go workout and not be concerned that I’d miss a bonfire.

When I returned from my workout I examined the set up and noticed that Hadley grabbed some dryer lint and dry grass to use as an igniter underneath his sticks. I don’t know too many deer or owls that utilize a washer and dryer in the wilderness so I think that finding some lint out there may be problem number one if placed in the wilderness and expected to perform the same function. So, the authenticity of any fire we may have garnered could have an asterisk adorning it, simply because of the dryer lint.

After watching Hadley work up a considerable pool of sweat, I tried my luck. I got just about as far as he did. We were both able to garner smoke, but never a flame. Your arms get quite the workout in the process. My attempt was fruitless other than strengthening my jerk-off arm. 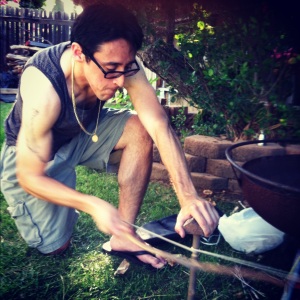 I kind of already figured my eventual Cause Of Death would be freezing to death in the wilderness, but this experiment certainly proved that accurate.

In concept, it seems pretty simple to think a fire can be started with two sticks. I’m here to tell you that it is not. In order to create some friction you have to pull and push on the bow with a nice rhythm and you have to keep the stick in place as much as possible. Then when you see smoke rising from your efforts you tend to get a little excited because you think you are close, so you start pushing and pulling harder on the bow, which causes you to lose rhythm which forces the stick to break loose. 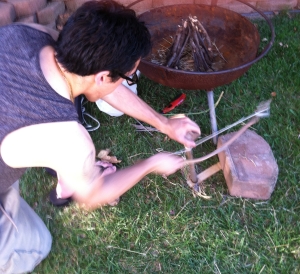 I need to shave around my neck.

I gave up after spending about two hours outside. After Hadley attempted for a couple more hours he gave up as well, to be continued at a later date. I thought the endeavor would have ended in one of two ways. We either would have set the block on fire or not even a spark would be generated. I’m not shocked, however, that it ended in the latter.

I contend that our efforts weren’t successful simply because we had nothing on the line. Tom Hanks was able to create fire when he was abandoned on a lonely island because he needed it for survival. All he had was a volleyball and some ice skates. We were in the comfort of our backyard with full stomachs and beverages in hand. For God’s sake, Hadley took a few smoking breaks. I believe we could have created fire if our lives were on the line.

Hadley seems optimistic about his efforts to beat a boy scout, so much so that during the practice session he set up a water hose next to the fire pit, in the chance that he created a scene reminiscent of “Backdraft.” I on the other hand will now always be carrying a lighter with me in the off chance that I end up lost in the wilderness or on a deserted island one day…and knowing my luck, that will happen one day.